After years of improvement and research and development, YKSL type graphite synthesis furnace has developed two effective patent technologies due to multi-directional improvement, which has made the technical performance level of China's three in one furnace, especially the unit capacity and reliability.

The top cover of the first furnace head is cooled by liquid, and the inner and outer walls of the synthesis cylinder are cooled in the whole process. The shell and graphite parts are sealed by "O" ring. Special design is adopted to ensure the uniform distribution of absorption liquid on the absorption block And other structural improvement measures. The overall performance and reliability of the furnace have been improved. The patent technology of uniformly distributed absorption liquid effectively protects the graphite synthetic cylinder, thus laying the foundation for improving the production capacity and producing under harsh conditions; the patent technology of "strengthening heat transfer" further improves the reliability of the furnace barrel.

Therefore, YKSL type graphite synthesis furnace can improve the overall performance and reliability at the same time. For example:

Note: 1. The data in this column are from the samples of SGL company of Germany in 1990s. The outer diameter of synthetic furnace barrel is not an integer, so the standard is 400 + and 500 soil

In May 2004, it was selected by Sitara chemical industries, Pakistan, which has already used 7 French furnaces and 2 German furnaces. The furnace was successfully ignited in January 2005. Subsequently, the company ordered the second set in 2005 and another two in 2006. 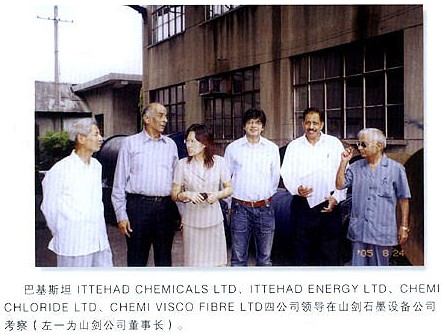 On January 5, 2006, China Chemical Industry News reported in the industry: "the report that China's corrosion prevention industry is rising confirms that our" three in one graphite hydrochloric acid synthesis furnace "has not only achieved the advanced level of acid production rate of volume and cross-sectional area of furnace barrel made of domestic graphite materials, but also greatly improved the effectiveness and reliability of the furnace.